Yarn spinning is one of the first industries which humans were able by using wooden spindle to pull a large number of fibers together and produce yarn. This spinning method lasted for centuries until the spinning machine was invented in 18th century. Using of these systems increase production speed, increase yarn quality and reduces costs. The machines used in spinning line depend on the type of yarn produced, and it is clear the machines used in spinning vary depending on the type of yarn produced. Ring spinning system has long been used to produce yarn in short fiber spinning systems but with the increase in demand, there were obstacles to mass production of yarn in this system. Increasing the production rate of ring spinning requires the fast passage of roving produced in the flyer step from the front roller as well as its rapid passage through the spinning triangle and the comfortable and smooth passage of the yarn between the gaps and glass frame to twist the yarn on the spindle. Achieving to these issues requires increasing the speed of tension rollers, increasing the speed of spindle and the produced balloon. On the other hand, the tension rollers of the ring machine, especially the rollers of the front area, suffering from continuous and unwanted vibrations due to their long length, specifically at high speeds, and as a result, have a negative effect on tension and yarn quality. To prevent such damage, great care is taken in the design and construction of shafts and special raw materials are used. These requirements increase the cost of machine building as well as maintenance. 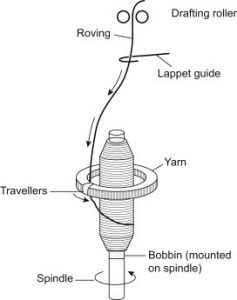 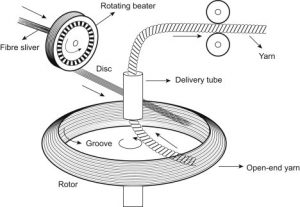 In 1980, a new method was introduced called Vortex spinning, which was a great commercial success. In fact, the presence of the Vortex spinning system led to the completion of part of the stipple fiber open end spinning market, in which open end spinning was not technically and economically successful. Vortex spinning is a technology which uses an air vortex to spin out the yarn. Fibers formed by these air flows possess a unique structure, and this provides the yarn with a wide range of functionalities. 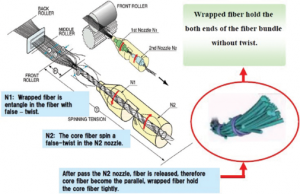 The type of fibers used and stretching (low longitudinal changes of fibers) are very effective in Vortex system. In other words, open end spinning is suitable for medium to thick yarn grades and Vortex spinning is suitable for medium to delicate grades. According to comparisons, due to structural differences between the ring and vortex, the strength of the yarns produced with vortex is less than ring. For example, for cotton yarns, the strength of Vortex yarns is 55 to 60 percent of the strength of similar ring yarns. The level of unevenness and defects of vortex yarn is less compared to similar ring yarn. According to research, in vortex spinning the rate of non-uniform reduction is 20 to 25 percent and the rate of reduction of defects is up to 30 percent less than similar ring yarns, and also the thicker yarns, the smaller difference. The amount of snarl by Vortex yarns is less than that of similar ring yarns. But the yarns produced in the Vortex system have less coating strength, a more variable yarn structure, and a more uneven twist. The resistance to bending and abrasion of Vortex yarns is higher than that of similar ring yarns, and as can be seen in the following figures, the pilling of Vortex yarn is less than ring and open end, which increases the resistance of fabric against abrasion.

comparison of resistance of fabric against abrasion

The following figures give a more accurate comparison of the amount of pilling produced for yarns in the Ring, Open end, and Vortex spinning.

Comparison of Vortex, Ring and Open end yarns in terms of pilling rate

In another comparison, the washing stability of ring, open end and vortex yarns in fabrics was examined and it turned out that the lower amount of pilling the yarn had, the more suitable it will be for textiles such as towels.

Comparison of washing stability of textiles made of Vortex, ring and open end yarns