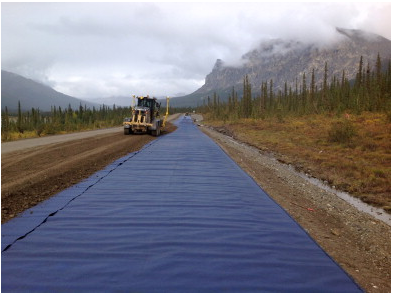 Geotextiles are penetrable fabrics with the ability to separate, filter, reinforce, and protect the soil. They are usually made using polypropylene, polyester, polyamide, polyethylene, polyvinylidene chloride, and fiberglass in three common ways of weaving, needle punching, and heat bonding.

These types of fabrics are used as reinforcement in roads, airports, railroads, channels, etc.

The following list shows the advantages of knitting geotextiles rather than weaving ones:

The following picture illustrates a multifunction geotextile network with zero and 90 degrees in the warp and weft directions, respectively. The warp yarns are responsible for receiving the main pressure due to their higher linear density.

Geotextiles can adjust the relationship between stress and strain because they are made by thermo viscoelastic materials. So their strength is tested based on the input force.

These powerful tools can help engineers to overcome many issues related to the soil. Choosing a proper geotextile based on the correct roles can lead to high-value advantages for people and industries.

Although geotextiles are cost-effective, the absence of clear laws in the use of them in road building can inhibit their market growth.

According to global geosynthetic studies, it is expected to increase the demand for geotextiles by 8-9 percent annually. In 2012 Asia with 35 percent of the total geotextile consumption was the leader of the geotextile market in the world.

Nowadays, Asia, North America, and Europe with 46, 26, and 27, respectively, are the biggest leaders in nonwoven textiles. Since 2002 nonwoven textiles have shown a great potential in geotextiles production