Polypropylene (pp), also known as polypropene, is a thermoplastic polymer. It is produced via Chin-Growth polymerization from the monomer propylene. Polypropylene belongs to the group of polyolefin and is partially crystalline and non-polar. Its mechanically rugged material and has a high chemical resistance against hot weather. Bio-pp is the bio-based counterpart of polypropylene(pp) which is considered by researchers these days. polypropylene is the second-most widely produced commodity plastic (after polyethylene).

Propylene is in many aspects similar to polyethylene, especially in solution behavior and electrical properties. The methyl group improves mechanical properties and thermal resistance, although the chemical resistance decreases – The properties of polypropylene depend on the mole. The molecular weight and molecular weight distribution, crystalline, type and proportion of Co monomer (if used) and the isotacticity. In isotactic polypropylene, for example, the methyl groups are oriented on one side of the carbon backbone. This arrangement creates a greater degree of crystallinity.

The main benefit of polypropylene as a fabric is its moisture transfer abilities. This textile cannot absorb any moisture, and instead, moisture passes through polypropylene fabric entirely so it is not suitable for underwear.

How is polypropylene fabric made?

Like most types of plastics, polypro is made from substances that are derived from hydrocarbon fuels like petroleum oil.

First, the monomer polypropylene is extracted from crude oil in gas form, and this monomer is then subjected to a process called chain-growth polymerization to create the polymer polypropylene. Once a long number of propylene monomers are strung together, a solid plastic material is formed. To make a useable textile, polypropylene resin must be mixed with a wide variety of plasticizers stabilizers, and fillers. These additives are introduced into molten polypro, and once the desired substance is acquired, this plastic may be allowed to cool into bricks or pellets. 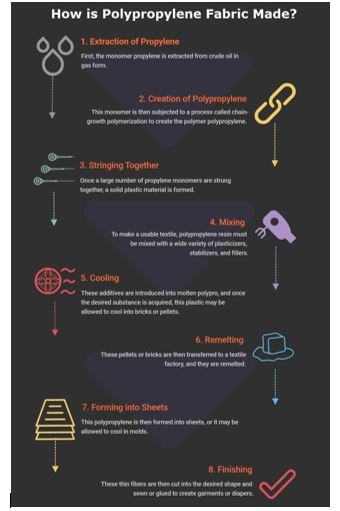 Where Is Polypropylene Fabric Produced?

The biggest producer of finished polypro fabrics is China, and this type of textile is also sewn into garments and other types of fabrics in India, Pakistan, Indonesia, and a number of other countries.

Iran Yarn website is the best link between Iran and other countries in the field of yarn, fibers and other textilesIf you want to import from or export to Iran, please contact us.